Why is Zelda the best RPG of the whole world of videos games, beyond all the others ? Are there really reasons or is it just I, Salagir, who can't tell because it's the first game I played ? Can I have an objective point of view ?
Well, I tried to put it on a paper, and... it's true. Zelda really rulez ! It does for at least three reasons !

Miyamoto always makes games that are really easy to handle : Super Mario, only one button : jump ! Sometimes, another to shoot. Well then, the best sold game ever !
In every Zelda and Mario game, all the skills you have are clearly explained threw the game. Usually with some tutorials ! Even without then, it's always easy : no A+B+turn left then L+R+down to use a technique... No menus to select one of the 53 special objects or techniques.

Also, worlds and levels are quite small and so then very simple : no need to know a so large world, just to find out there's nothing in it ! You won't be lost neadlessly.

The fact the world is small leads to few quests and so all the quests are really different. It's not a succession of levels all identicals.
In Final Fantasy, monsters attack you randomly, the levels never ends and are very repetitives... In Zelda we usually do the same level but a slight changed (turned upside down for exemple) and everyting is different. Plus, you can do more subtiles thing with that. Lots of RPGs are too much "keep walking and slash". It's not Double Dragon !
Each level is really original, because when finished, you won't see it again. Usually, in long games, the level is to be made 3 times, but the color and powers of ennemies, order of rooms are a bit changed (sigh). 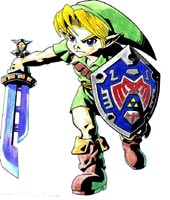 As I said, each level is different, and rare. So then it has to be the most beautiful possible. Each background is personnal, original.
In Zelda 64, each castle got a different theme and skin. In Secret of Mana (Seiken Densetsu 2), we're going into lots of castles exactely the same theme, and even for the elements castle, it's not original : the only difference between the Fire Palace and the Water Palace is the color of the walls !